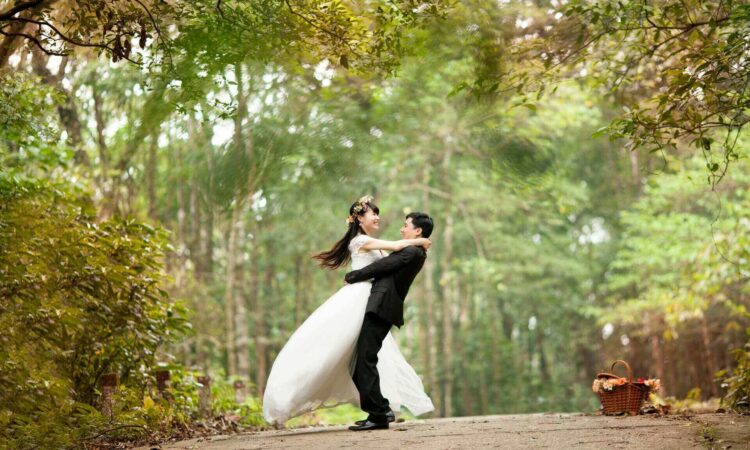 A white wedding is a traditional formal or semi-formal wedding originating in Britain.

The term originates from the white colour of the wedding dress, which first became popular with Victorian era elites after Queen Victoria wore a white lace dress at her wedding. However, the term now also encapsulates the entire Western wedding routine, especially in the Christian religious tradition, which generally includes a ceremony during which the marriage begins, followed by a reception.
links

The tradition of a white wedding dress is commonly credited to Queen Victoria’s choice to wear a white court dress at her wedding to Prince Albert in 1840. Debutantes had long been required to wear white court dresses for their first presentation at court, at a “Drawing Room” where they were introduced to the queen for the first time.

Royal brides before Victoria did not typically wear white, instead choosing “heavy brocaded gowns embroidered with white and silver thread,” with red being a particularly popular colour in Western Europe more generally.European and American brides had been wearing a plethora of colours, including blue, yellow, and practical colours like black, brown, or gray. As accounts of Victoria’s wedding spread across the Atlantic and throughout Europe, elites followed her lead. After Queen Victoria’s and Prince Albert’s wedding, the color white resembled wealth and social status.

Worldwide, the color white has been associated with weddings and other significant life or spiritual events for millennia. In ancient Greece, white was the color of bridal joy, and brides not only wore white dresses and white flowers, but they also painted their bodies white. In China, it was the color of purity and perfection, and thus uniquely suitable as a color associated with death, which they saw as the time when the deceased person moved towards ultimate perfection. In ancient Japan, white was also the color of purity and innocence.In Africa, the color white is associated with deities and worship.In the Christian tradition, white clothes were worn at the time of baptism to represent spiritual purity and the washing away of sins.

Because of the limitations of laundering techniques before the later part of the 20th century, white dresses provided an opportunity for conspicuous consumption. They were favored primarily as a way to show the world that the bride’s family was so wealthy and so firmly part of the leisre class that the bride would choose an elaborate dress that could be ruined by any sort of work or spill.

Although women were required to wear veils in many churches through at least the 19th century, the resurgence of the wedding veil as a symbol of the bride, and its use even when not required by the bride’s religion, coincided with societal emphasis on women being modest and well-behaved.

Etiquette books then began to turn the practice into a tradition and the white gown soon became a popular symbol of status that also carried “a connotation of innocence and virginal purity.”The story put out about the wedding veil was that decorous brides were naturally too timid to show their faces in public until they were married.

By the end of the 19th century the white dress was the garment of choice for elite brides on both sides of the Atlantic. However, middle-class British and American brides did not adopt the trend fully until after World War II.With increased prosperity in the 20th century, the tradition also grew to include the practice of wearing the dress only once. As historian Vicky Howard writes, ” a bride wore white in the nineteenth century, it was acceptable and likely that she wore her gown again”.Even Queen Victoria had her famous lace wedding dress re-styled for later use.

The portrayal of weddings in Hollywood movies, particularly immediately after World War II, helped crystallize and homogenize the white wedding into a normative form.

The white wedding style was given another significant boost in 1981, when three-quarter billion people—one out of six people around the globe—watched Charles, Prince of Wales marry Diana Spencer in her elaborate white taffeta dress with a 25-foot-long train. This wedding is generally considered the most influential white wedding of the 20th century.

The traditional white wedding wasn’t necessarily defined by the color of the dress only. The wedding of Queen Victoria’s daughter Victoria, to Prince Fredrick William of Prussia in 1858 also introduced choral music to the processional when standard practice had been to have music of any kind only during a party after the wedding ceremony.

After World War I, as full-scale formal weddings began to be desired by the mothers of brides who did not have a permanent social secretary, the position of the wedding planner, who could coordinate the printer, florist, caterer, and seamstress, began to assume importance. The first edition of Bride’s Magazine was published in 1934 as a newspaper advertising insert called “So You’re Going to Get Married!” in a column titled “To the Bride”, and its rival Modern Bride began publishing in 1949. Today a whole industry surrounds the provision of such weddings.

The full white wedding experience today typically requires the family to arrange for or purchase printed or engraved wedding invitations, musicians, decorations such as flowers or candles, clothes and flowers for bridesmaids, groomsmen, a flower girl, and a ring bearer. They may also add optional features, such as a guest book or commemorative wedding leaflets. It is common to have a celebration after the wedding ceremony, normally featuring a large white wedding cake.

A subtle shift in the requirements for a wedding can be detected in the modern blurb for Emily Post’s Weddings “creating a wedding experience that demonstrates the bride and groom’s commitment and uniqueness.” “Uniqueness” is a modern addition to a wedding’s requirements.