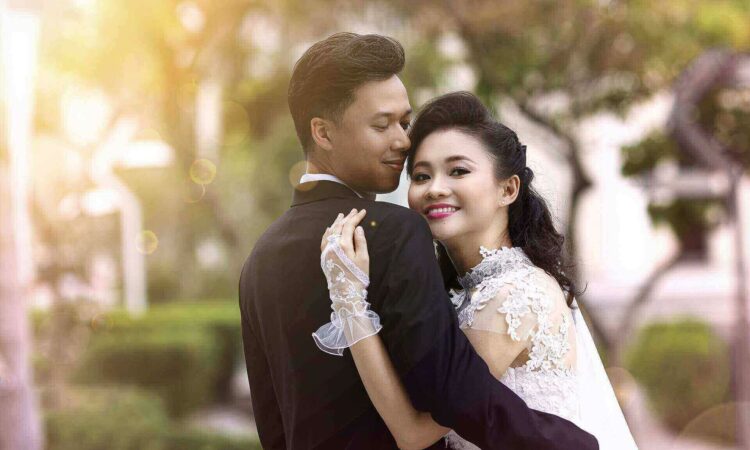 Hindu ceremonies are usually conducted totally or at least partially in Sanskrit, the language of the Hindu scriptures. The wedding celebrations may last for several days and they can be extremely diverse, depending upon the region, denomination and caste. Mehendi ceremony is a traditional ritual in Hindu weddings, where Henna application takes place on bride’s hands and legs, before the wedding. On the wedding day, the bride and the bridegroom garland each other in front of the guests. Most guests witness only this short ceremony and then socialize, have food and leave. The religious part (if applicable) comes hours later, witnessed by close friends and relatives. In cases where a religious ceremony is present, a Brahmin (Hindu priest) arranges a sacred yajna (fire-sacrifice), and the sacred fire (Agni) is considered the prime witness (sākshī) of the marriage.

He chants mantras from the Vedas and subsidiary texts while the couple are seated before the fire. The most important step is saptapadi or saat phere, wherein the bride and the groom, hand-in-hand, encircle the sacred fire seven times, each circle representing a matrimonial vow. Then the groom marks the bride’s hair parting with vermilion (sindoor) and puts a gold necklace (mangalsutra) around her neck. Several other rituals may precede or follow these afore-mentioned rites. Then the bride formally departs from her blood-relatives to join the groom’s family.
A wedding is a ceremony where two people are united in marriage. Wedding traditions and customs vary greatly between cultures, ethnic groups, religions, countries, and social classes. Most wedding ceremonies involve an exchange of marriage vows by the couple, presentation of a gift (offering, ring(s), symbolic item, flowers, money), and a public proclamation of marriage by an authority figure. Special wedding garments are often worn, and the ceremony is sometimes followed by a wedding reception. Music, poetry, prayers or readings from religious texts or literature are also commonly incorporated into the ceremony.

Most Christian churches give some form of blessing to a marriage; the wedding ceremony typically includes some sort of pledge by the community to support the couple’s relationship. A church wedding is a ceremony presided over by a Christian priest or pastor. Ceremonies are based on reference to God, and are frequently embodied into other church ceremonies such as Mass.Customs may vary widely between denominations. In the Roman Catholic Church “Holy Matrimony” is considered to be one of the seven sacraments, in this case one that the spouses bestow upon each other in front of a priest and members of the community as witnesses. As with all sacraments, it is seen as having been instituted by Jesus himself (see Gospel of Matthew 19:1-2, Catechism of the Catholic Church §1614-1615). In the Eastern Orthodox Church, it is one of the Mysteries, and is seen as an ordination and a martyrdom. The wedding ceremony of Saint Thomas Christians, an ethnoreligious group of Christians in India incorporate elements from Hindu, Jewish and Christian weddings.

“The Order for the Service of Marriage” in the Methodist Book of Worship for Church and Home (1965) specifies the important of premarital counseling, stating that the “minister is enjoined diligently to instruct those requesting his offices for their prospective marriage in the Christian significance of the holy estate into which they seek to enter”. In the Free Methodist Church and African Methodist Episcopal Church, both apart of the World Methodist Council, contain a rubric for the reading of the banns.The Service of Christian Marriage (Rite I) includes the elements found in a standard liturgy celebrated on the Lord’s Day as well as other elements unique to this Mass: the Entrance, Opening Prayer, Old Testament Reading, Psalm, New Testament Reading, Alleluia, Gospel Reading, Sermon, Recitation of one of the ecumenical creeds, prayers of the faithful, Offertory, the Declaration by the Man and the Woman, Response of the Families and the People, Exchange of Vows, Blessing and Exchange of Rings, Declaration of Marriage and celebration of the Eucharist, and Benediction.