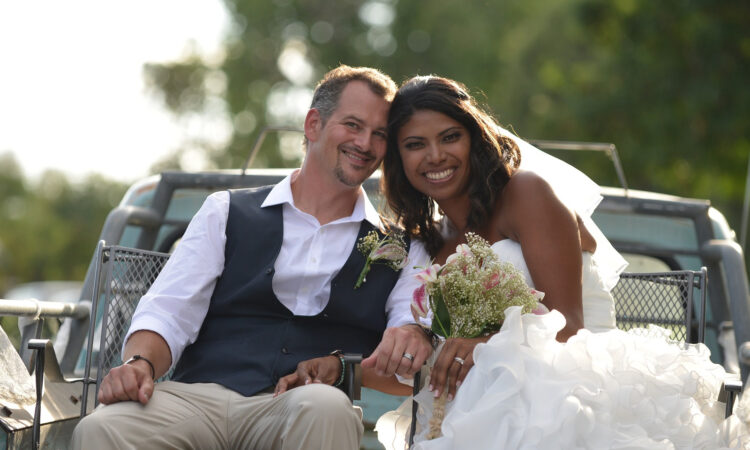 A wedding is a ceremony where two people are united in marriage. Wedding traditions and customs vary greatly between cultures, ethnic groups, religions, countries, and social classes. Most wedding ceremonies involve an exchange of marriage vows by the couple, presentation of a gift (offering, ring(s), symbolic item, flowers, money), and a public proclamation of marriage by an authority figure. Special wedding garments are often worn, and the ceremony is sometimes followed by a wedding reception. Music, poetry, prayers or readings from religious texts or literature are also commonly incorporated into the ceremony.

Some cultures have adopted the traditional Western custom of the white wedding, in which a bride wears a white wedding dress and veil. This tradition was popularized through the marriage of Queen Victoria. Some say Victoria’s choice of a white gown may have simply been a sign of extravagance, but may have also been influenced by the values she held which emphasized sexual purity. Within the modern ‘white wedding’ tradition, a white dress and veil are unusual choices for a woman’s second or subsequent wedding.

The use of a wedding ring has long been part of religious weddings in Europe and America, but the origin of the tradition is unclear. One possibility is the Roman belief in the Vena amoris, which was believed to be a blood vessel that ran from the fourth finger (ring finger) directly to the heart, Thus when a couple wore rings on this finger, their hearts were connected. Historian Vicki Howard points out that the belief in the “ancient” quality of the practice is most likely a modern invention. “Double ring” ceremonies are also a modern practice, a groom’s wedding band not appearing in the United States until the early 20th century.

The wedding ceremony is often followed by wedding reception or a wedding breakfast, in which the rituals may include speeches from the groom, best man, father of the bride and possibly the bride,[4] the newlyweds’ first dance as a couple, and the cutting of an elegant wedding cake.

Music played at Western weddings includes a processional song for walking down the aisle (ex: wedding march) either before or after the marriage service. An example of such use is reported in the wedding of Nora Robinson and Alexander Kirkman Finlay in 1878.[8] Relevant music includes:
Various works for trumpet and organ, arguably the most famous of which include the Prince of Denmark’s March by Jeremiah Clarke as a processional, the “Trumpet Tune” by Henry Purcell and the “Trumpet Voluntary” by John Stanley as recessionals.
Selections by George Frideric Handel, perhaps most notably the “Air” from his Water Music as processional and the “Alla Hornpipe” as recessional.
The “Bridal Chorus” from Lohengrin by Richard Wagner, often used as the processional and commonly known as “Here Comes the Bride”. Richard Wagner is said to have been anti-Semitic,[9] and as a result, the Bridal Chorus is often not used at Jewish weddings.
Johann Pachelbel’s Canon in D is an alternative processional.
The “Wedding March” from Felix Mendelssohn’s incidental music for the Shakespeare play, A Midsummer Night’s Dream, used as a recessional.
The “Toccata” from Charles-Marie Widor’s Symphony for Organ No. 5, used as a recessional.
Segments of the Ode to Joy, the fourth movement of Ludwig van Beethoven’s Ninth Symphony.
Other alternative considerations include various contemporary melodies like Bob Marley’s One Love which is often performed by a steel drum band.